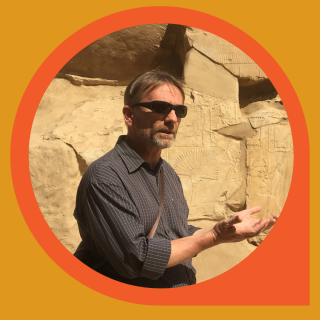 Olaf Kaper, Professor of Egyptology at Leiden University, worked in many different countries over the years, and it all started in Leiden. As a child, Prof. Kaper was fascinated by Ancient Egypt, and it was an easy choice to study Egyptology at Leiden University. “When I found out that you could actually study it, that’s really what I wanted to do.”

After his studies, he moved to Cairo to work at The Netherlands-Flemish Institute in Cairo (NVIC), and carried out fieldwork in the Oasis of Dakhla, in Egypt’s Western Desert. The focus on excavating ancient religious structures taught him about archaeology. Although excavations in Dakhla are currently restricted, the Oasis is an ongoing source of inspiration. While he loved living and working in Cairo, it was time for a change. He worked in Melbourne and Berlin before returning to Leiden after 15 years. “I had not counted on coming back, I was very happy living outside of Holland.” Still, Prof. Kaper enjoyed being back on familiar grounds.

In Australia, Prof. Kaper got the opportunity to work on a long-standing interest, the Tomb of Tutankhamun, when he researched seal impressions in the tomb. Now, he is working with Gillian Vogelsang-Eastwood* on the textiles found in the tomb and the pharaoh’s costume in a larger context. “The kings are depicted in traditional ways. In reality they wore very decorative clothing.”

Since this year marks the 100th anniversary of the discovery of Tutankhamun’s tomb, Prof. Kaper took part in the organisation of the ‘Month of Tutankhamun’ to celebrate this. During the kick-off event at Rijksmuseum van Oudheden, Prof. Kaper gave a lecture on the ‘guardian statues’ in the tomb. Aside from Tutankhamun, Prof. Kaper pursues diverse research projects: He has researched the construction of pyramids. A current project focuses on the Oasis of Dakhla during WWI. Finally, he is working on excavations in a temple of Isis on the Red Sea. “That’s simply how I work, it’s interesting to follow different interests, even when that goes outside the field of Egyptology. I think it’s still all connected.”

Unsurprisingly, Prof. Kaper hesitates to choose one specialisation. “I am a generalist, I follow my own interests, that takes me to many different fields.” Still, his research focuses on Egypt and he likes pursuing the ‘mainstream’ questions, that people ask all the time. “We have an obligation of course, to write for the public as well.” Prof. Kaper enjoys combining his research with teaching and giving lectures. “I use my experiences from the field in my teaching, and the other way around, in teaching you learn to place your research in a broader context.” His interest to spread knowledge to a wider group is also shown in the TEDtalk on Egyptology that Prof. Kaper gave in 2015.

For now, there is a lot of work to do on current projects, including the Month of Tutankhamun. First, Prof. Kaper wants to finish his main projects and publications, and there is plenty of interest to pursue in the future.

* On 18 November, Gillian Vogelsang-Eastwood holds a lecture on the textiles at the National Museum of Antiquities. The lecture is in Dutch.