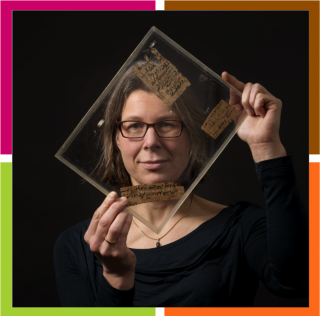 Exchanging Knowledge on the Middle East

Prof. Sijpesteijn started her academic career by studying history at Leiden University. Here she discovered that Western civilization has been strongly influenced by the Arab world, to which little attention was paid. She decided to study Arabic as well and continued with history and Arabic during her masters and PhD. One motivation was that large parts of the Middle East had hardly been historically researched. With a contribution to that scholarship she is able to make a major impact.

Petra Sijpesteijn is interested in studying every day experiences in the the early history of the Muslim Middle East through primary sources. In an empire, the behaviour of its inhabitants does not necessarily equal the policy and legislation of its ruler. The Muslim empire contained many different religious, linguistic, ethnic groups who all interacted in different ways with its laws and moral models. Prof. Sijpesteijn likes to show this diversity through people’s daily life.

In her current project "Embedding Conquest: Naturalizing Muslim Rule in the Early Islamic Empire (600-1000)", she examines how the Islamic Caliphate has been able to maintain unity for 300 years, by studying how individuals interacted and formed connections. Among other things, she looks at organisational structures and how people could solve day-to-day problems. Through the Twitter page of the project, a broad audience, can follow the project and learn about it.

In addition to doing research, Prof. Sijpesteijn finds it important to share her knowledge, also outside the academic realm, creating an an exchange that benefits both parties. She teaches at Leiden University, gives online lectures for example at the 'Universiteit van Nederland' (in Dutch), and speaks at cultural institutions. With colleague Birte Kristiansen she developed several initiatives to communicate her knowledge to a wide and diverse audience outside the academy. The Coursera course "The Cosmopolitan Medieval Arabic World" has already reached more than 17.000 people world-wide. They are now preparing a Dutch-language book on the basis of this course. They also contribute to the current Leiden World Walks for Leiden2022 which resulted in "Traces of the Middle East in Leiden". There are also two animations in the making about daily life in the Abbasid Empire and the rise of Islam  for the YouTube channel TED-ed, in which she can reach millions of people with her knowledge, as it has 16.6 million subscribers. Prof. Sijpesteijn says that "by presenting your material to different people in society, you will gain a fresh perspective on your own work as you are confronted by questions from unexpected angles".

In the immediate time ahead, Prof. Sijpesteijn will mainly be busy with the publication of her current research and teaching at Leiden University. She nevertheless has some ideas about possible research in the future, such as investigating through primary sources how people in the early Islamic empire interacted with the built and natural environment through agricultural and exploitation but also in stories and poetry. In short, she will continue to use and share her knowledge in various ways.